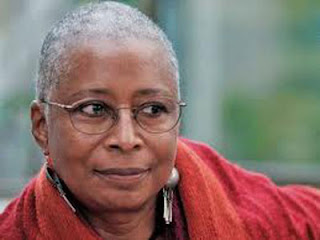 In a move that Alan Dershowitz correctly calls “bigotry and censorship,” writer Alice Walker has said she would not allow the translation of her novel The Color Purple into Hebrew because “Israel is guilty of apartheid and persecution of the Palestinian people, both inside Israel and also in the Occupied Territories.” She also said that South Africans have assured her Israel’s policies are worse than apartheid.
Walker intends to bring this evil, repressive Israeli regime to its knees by denying Hebrew-only readers access to her 30-year-old novel about black women burdened by sexism, racism, and poverty. This is the same Israel that allows its Arab citizens full rights, the only country in the Middle East that respects women’s rights, gay rights, and human rights for that matter.
No word on whether Walker will also deny her book to Palestinians until 1) the Hamas leadership repudiates the goal stated in its charter of utterly destroying the Jewish state, 2) stops indoctrinating Palestinian children to become suicide bombers, and 3) stops honoring the murderers of Jewish children.
Walker, an editor for Ms. magazine in the 70s, is best-known for the 1982 book, which won the Pulitzer Prize and American Book Award, and which was made into an Oscar-winning film directed by Steven Spielberg and starring Whoopi Goldberg and Danny Glover. In publicity photos Walker perpetually displays a smug, beatific smile that seems to say, “I’m a wise, loving, multicultural womanist at Oneness with That Which is Beyond Understanding But Not Beyond Loving.” (I’m not kidding – she writes like that; check out her short preface to the 10th anniversary edition of The Color Purple).

How much moral authority does Walker have to chastise Israel? Less than zero, if I may allude to another 80s novel. Let us count the ways in which she de-legitimizes herself as a champion of good over evil:
Predictably, she is a longtime admirer of murderous dictator Fidel Castro and of “a teacher of mine,” radical historian Howard Zinn, who has turned the hearts and minds of at least a generation or two against America.
Also predictably, Walker is a very vocal opponent of war – or more precisely, she’s an opponent of America during wartime. She protested the bombing of Afghanistan in the wake of 9/11 and participated, in March 2003, in an anti-war demonstration organized by Code Pink, the rabid far left activists who never met an American enemy they didn’t embrace.
She had planned to challenge Israel’s Gaza blockade with the (aborted) Freedom Flotilla last year in a boat that would have been called “The Audacity of Hope,” after Barack Obama’s book. Naturally, Walker is an Obama supporter. In her pretentious literary voice full of faux-poetic stylings that border on the hilarious, she once described candidate Obama as
a remarkable human being, not perfect but humanly stunning, like [Martin Luther] King was and like Mandela is. We look at him, as we looked at them, and are glad to be of our species. He is the change America has been trying desperately and for centuries to hide, ignore, kill. The change America must have if we are to convince the rest of the world that we care about people other than our (white) selves.
Obama makes us “glad to be of our species”? So until he came along, were we humans envious of crustaceans or fungi instead? As for the notion that America cares about no one other than our “white selves,” that is a ludicrous but typical fantasy of racist womanists (her neologism) like Walker, who see the warmongering white male patriarchy – especially the American and Christian variety – as the fount of all evil throughout history, destroying the innocence of pure, peaceful, matriarchal indigenous peoples with such brutal methods as the “missionary” sexual position. (As usual with Western feminists, she is silent about Islamic misogyny.)
Unsurprisingly, Walker is also a staunch opponent of capital punishment, specifically the execution of black cop-killers. A supporter of celebrity darling Mumia Abu-Jamal, whom she describes as “beautiful” and “compassionate,” she says he reminds her of Nelson Mandela and has no doubt he was framed. She supports amnesty for domestic terrorist Assata Shakur, former Black Panther and Black Liberation Army leader (and the step-aunt of murdered hip hop icon Tupac Shakur).
Assata Shakur was convicted of first-degree murder and sentenced to life in a maximum-security prison for a 1973 shootout that left a state patrolman dead. She escaped from prison in 1979 and lived underground until 1986, when she was given political asylum in Cuba, where she has lived ever since. Walker takes Shakur’s word that she is innocent, and believes that attempting to punish her any further is “demonic.” “I firmly believe that the only punishment that works is love,” pontificates Walker.
Actually, she believes even more firmly in punishing people by denying them love. Walker’s daughter Rebecca painted a devastating portrait of her mother’s cruel hypocrisy in a tragic article exposing the emotional damage caused by the heartless woman revered the world over as a feminist icon:
I came very low down in her priorities – after work, political integrity, self-fulfillment, friendships, spiritual life, fame and travel…
My mother's feminist principles colored every aspect of my life… It was drummed into me that being a mother, raising children and running a home were a form of slavery. Having a career, travelling the world and being independent were what really mattered according to her…
Rebecca describes a life of near-abandonment by the famous writer who champions sisterhood while scorning motherhood, and who showed her own child not love and affection but resentment or, at best, indifference. When the adult Rebecca finally chose not to repress her maternal instincts any longer and became pregnant, Walker disowned her: “I haven't seen her or spoken to her since I became pregnant,” says Rebecca. “She has never seen my son – her only grandchild. My crime? Daring to question her ideology.”
And that betrayal is unforgiveable to leftist ideologues like Alice Walker. As her daughter learned the hard way, her ideology supersedes family and even humanity.
For the cold, hypocritical, racist, sexist, America-blaming radical Walker to claim the moral high ground over Israel while remaining silent in the face of Muslim atrocities is typical of the left’s delusional self-righteousness and of their collusion with Islamic totalitarians. For Walker to expect that her anti-Israel gesture will have any efficacy is typical of her overinflated self-opinion. It doesn’t occur to her that by refusing to allow her overrated novel to be translated into Hebrew, she is actually doing Israeli readers a favor.
(This article originally appeared here on FrontPage Mag, 6/27/12)
at 11:19:00 PM