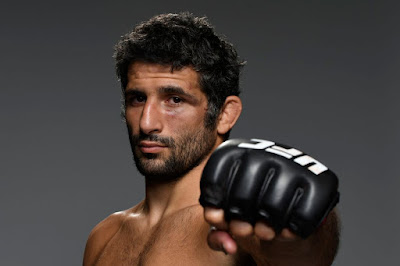 After a few short seasons of athletes ruining sports from high school games to the professional leagues to the Olympics with performative wokeness, fans are rightfully fed up with having anti-American political statements and “black national anthems” shoved in their faces. Some of the most privileged, celebrated people in America, like petulant blowhard LeBron James and cop-hating communist Colin Kaepernick, have turned events that once united Americans into yet another divisive political battleground in the culture. The result is record-low ratings in every affected sport.

But there is one sport that hasn’t been sabotaged (yet) by social justice activism, and likely won’t be: mixed martial arts (MMA), perhaps because it’s difficult to lecture your 0pponent about racial equity when you’re losing consciousness in a triangle choke.

After the lightweight bout at Ultimate Fighting Championship (UFC) 262 in Houston on May 15, for example, in which 32-year-old Beneil Dariush destroyed former champ Tony Ferguson, Dariush took the mic to deliver an unusual victory speech to the crowd.

“I want to thank my Lord and Savior Jesus Christ, that’s number one,” the Iranian-born Darish began. Calling for calm from the crowd, he continued: “Number two, I want to dedicate this fight to all the people who’ve been hurt by Marxist ideologies. There are millions of you. I know it’s just a fight. I know it’s not much, but I want you to know that I love you. I understand the pain.”

Last week, he appeared on Candace Owens’ show to explain that the catalyst for making his statement was UFC fighter Rose Namajunas. “She fought Weili Zhang and she came out and said, ‘Better dead than red.’ And her family, I believe, was Lithuanian,” said Dariush. “And that was their slogan, ‘Better dead than red.’ And she got a terrible backlash.”

Dariush was referring to UFC strawweight Namajunas, who said before her bout against Zhang Weili, the UFC’s first champion from China, that her philosophy is, “Better dead than red,” an anti-communist expression coined during the Cold War. Namajunas said her motivation to take on Zhang was because her family is from Lithuania, where people understand just how devastating communism is. She added that Zhang is “red, that’s what she represents. It’s nothing personal against her, but that’s a huge motivating factor of why I fight and I fight for freedom and I’ve got the Christ consciousness, I’ve got Lithuanian blood and I’ve got the American dream and all of those things I’m taking with me into this fight.”

Another source of inspiration for Namajunas was the documentary The Other Dream Team, about the 1992 Lithuanian men’s national basketball team, which entered the Barcelona Olympics as an independent country after leaving the Soviet Union.

“If you’re confused about any of my opinions, you can watch the documentary, and you could get a good idea as to what my family had to go through, the reason I’m in the United States today, the reason that I do mixed martial arts, all of that stuff,” Namajunas said Wednesday on Ariel Helwani’s MMA Show. “I’d probably have a really different life if it wasn’t for everything in that documentary, how Lithuanians had to struggle with communism oppression.”

Predictably, Namajunas was attacked for taking a shot at the left’s cherished collectivism. Media outlets such as the South China Morning Post even tried to link her to Lithuania’s past with Nazis, as did this contributor to far-left outlets The Guardian and Open Democracy, who smeared her and other pro-freedom MMA fighters as Nazis and dreaded “nationalists.” One social media hater wrote to Namajunas, “I hope Zhang will destroy you” and blasted Namajunas for speaking “stereotypical nonsense about communism.”

“And I just couldn’t understand it,” Dariush told Candace Owens. “She’s not saying anything crazy. You don’t want communism. You don’t want this socialism. This is what destroys countries and lives.”

By pointing this out, Dariush displayed exactly what the woke corporate-media complex unjustifiably lauds Kaepernick for: courageous truth-telling. Dariush then described how the left-wing media spun Namajunas’ story:

I saw how the media played it, they turn it, and they say “communism … it’s not even an issue in America,” things like that. And they kind of put a lot of pressure on her. And I actually felt bad for her.

She should be able to say that as much as she wants and pretty much everybody should. So with that being said, I said I was going to actually just say the same thing she said, but the issue is, it’s the way they [the media] play with words.

“So I just said ‘Marxism’ [in his victory speech]. It covers it all. The only difference between these is one of them is a slower poison that is going to kill you later on. And the other one kills you faster,” he concluded. “So, I think we’ve got to make sure we start calling it just Marxism. It’s all one. It’s all the same thing.”

Dariush went on to note that his Vietnamese wife’s family was among the boat people who fled the communist country after the war. He added that in his own country, Iran, the ayatollahs “made the government God… and it’s no different, it’s the same, it’s Marxist ideology. You make government number one, and people give up their rights.” He added astutely that the situation here is more insidious because in countries like China, communism is forced upon the people, while in America, “the ideology is seeping into every part of our lives.”

Dariush and Namajunas aren’t the only politically red-pilled UFC fighters. In a video attached to a July 12 tweet, Cuban-American fighter Jorge Masvidal said, “My father escaped Cuba when he was 14 years old. And I’ve only heard the horror stories, since I could process thoughts, of how shitty this communist regime, killing machine, is. So I just want to shed some light on Cuba — big SOS signal for them.

“This oppression has been going on for 61 years,” continued Masvidal, who even went on a four-city bus tour called “Fighters Against Socialism” with Donald Trump Jr. during former President Trump’s 2020 campaign. “This is not just because of the pandemic, or it’s not just because they ran out of medicine — they’ve been out of medicine and they’ve been out of resources and food because of the corrupt government and the extreme corruption over there where only a few at the top eat and everyone has to suffer. Those days have to end.”

In a later Instagram post, Madvidal blasted Kaepernick for his hypocrisy for wearing a t-shirt praising Cuban dictator Fidel Castro, noting that “cowards” like the GQ cover model Kaepernick should be sent to live in Cuba to experience real oppression.

It is a dispiriting sign of the left’s successful brainwashing of America that it takes foreign-born citizens to understand and testify to the horrors of Marxist ideologies, as Dariush put it. Meanwhile, useful idiots like LeBron James, a man with a nearly half-billion-dollar net worth, whines about systemic racism in America but defends China’s communist regime. If sports are going to be politicized, at least it’s refreshing to get pro-freedom, pro-capitalism statements from American patriots who know the truth and aren’t afraid to declare it.