Defeating 'The Enemy Within' 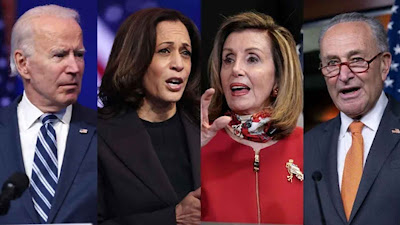 “Americans are more divided today than at any time since the Civil War,” writes bestselling author David Horowitz, the radical left’s most hated apostate, in his new book from Regnery Publishing, The Enemy Within: How a Totalitarian Movement is Destroying America. “The two parties are now guided by outlooks so divergent that their supporters seem to inhabit different universes.”

In The Enemy Within, the founder of the David Horowitz Freedom Center paints a painfully clear diagnosis of this schism. Dedicated to the millions of American victims of the left’s policies and “woke” bigotry, the book elucidates the roots of our division, beginning with an explanation (and condemnation) of identity politics – the racist, collectivist ideology that “forms the core conviction of America’s political progressives and the Democrat Party.” This “factually baseless and politically destructive” worldview, powered by a raging hostility to white Christian males and America’s founding principles, promotes the demonstrably ludicrous notion that “America is actually governed by racial and gender ‘hierarches’ that keep non-white, non-male citizens down,” Horowitz observes.

Identity politics, or cultural Marxism, is at heart an anti-American creed, he writes, that has metastasized throughout our K-12 schools (both public and private) and academia, replacing basic educational principles and scholarly inquiry with an historically ignorant activism that inculcates anti-white, anti-male, and anti-Christian bigotries. With the kind of factual, reasoned arguments that are the Kryptonite of today’s left, Horowitz proceeds to demolish such “dangerous fictions” of the left as “systemic racism” and “white privilege,” before eviscerating the left’s intellectual darling Ta-Nehisi Coates and his call for slavery reparations – or rather, racial extortion.

A section of the book called “Storm Troopers” begins with an examination of the Marxist revolutionaries of the Black Lives Matter (BLM) organization, “a racist and violent vigilante group” which has surged to political and cultural power in America by exploiting identity politics and centering itself within a network of hundreds of similarly anti-American leftist organizations. Many of those organizations, Horowitz notes, are funded by America’s largest corporations and philanthropies, such as billionaire agitator George Soros’ Open Society Institute, the Ford Foundation, and the ice cream magnates’ Ben & Jerry’s Foundation.

Horowitz then looks at the 2017 anti-Trump Women’s March and its radical feminist organizer Linda Sarsour, a very vocal supporter of the terrorists of Hamas, of raging anti-Semite Louis Farrakhan, and of cop-killing BLM icon Assata Shakur. At the March, the self-described “Palestinian Muslim sister” Sarsour delivered a call to support the litany of intersecting victim categories the left had weaponized against purportedly sexist, white America: black women, native women, undocumented women, people with disabilities, and the LGBT communities.

Horowitz moves on to revisit the unhinged spectacle of the Brett Kavanaugh Supreme Court nomination hearings, in which the left attempted to smear the future Supreme Court Judge as a sexual predator and a threat to American women – just as they also tried with then-President Donald Trump.

Such character assassination is at the center of the left’s strategy for dealing with political opposition and with threats to their deceitful narratives. Horowitz highlights other shocking instances of the left’s demonization of opponents such as Manhattan Institute scholar Heather Mac Donald, Fox News truth-teller Tucker Carlson, Florida’s Republican governor Ron DeSantis, and Horowitz himself. He singles out for condemnation the Southern Poverty Law Center (SPLC), which the mainstream media lends credibility as a civil rights watchdog, but which in truth is a smear machine in the service of the Democrat Party.

Horowitz then devotes a chapter to the “Orwellian Seditions” of anti-American, historical revisionists like Howard Zinn, Noam Chomsky, and Nikole Hannah-Jones, lead writer of the New York Times’ recent “1619 Project.” The 1619 Project posits the vile lie that America’s founding was grounded not in freedom and the dignity of the individual, but in slavery and racism. Despite being debunked by hundreds of historians, the 1619 Project is now being used in the curricula of over 4500 schools, and media mogul Oprah Winfrey is backing a feature film based on its distortion of America’s origins.

“The Political Future” section of the book kicks off with a chapter on “The Anti-Trump Resistance,” in which Horowitz points out that the “Democrat Party’s seditious commitment to mount a ‘Resistance’ to an elected president has led inexorably to sympathy for America’s enemies and the sabotage of American security,” such as when 174 House Democrats voted against an amendment that would have prevented the Transportation Security Administration from hiring convicted terrorists. This was intensified, he adds, by their hyper-partisan weaponization of the coronavirus pandemic, to which he devotes another chapter.

In the remainder of the book, Horowitz lays bare the truth about the left’s exploitation of the deaths of George Floyd and Breonna Taylor; presents the myth-busting statistics behind police-involved shootings of minorities; devastates the race-mongering irrationality of Critical Race Theory and the “Anti-Racism” scam of How to Be an Anti-Racist author Ibram X. Kendi; and body-slams the BLM movement and its anti-American narrative.

“As our nation enters the third decade of the twenty-first century, it is divided not by race – no society has ever been more diverse and inclusive – but by race politics, by an ideology that is totalitarian in nature,” Horowitz writes. And thanks in no small measure to Big Tech monopolies like Google and Facebook, “the apparatus of a totalitarian tyranny already exists for a party willing to use it to acquire and keep the reins of power.” Behind that apparatus, built upon the subversive legal foundations of the concepts of “hate speech” and “hate crimes,” Democrats are poised “to dismantle the American political order.”

Horowitz concludes The Enemy Within in a coda titled, “Love Against Hate.” In it he summarizes the mountain of evidence for voter fraud which likely enabled the Democrats to declare victory over Donald Trump, an incumbent who racked up 5 million more votes than any presidential candidate in history, and to install their placeholder President in the White House. The Democrats then proceeded to demonize anyone, including Republican Senators, who challenged the election results as conspiracy theorists and the equivalent of Nazi propagandists. They also moved swiftly to smear Trump and his supporters as domestic terrorists and, predictably, white supremacists.

The election pitted “those who love this country against those who hate it,” as political commentator Daniel Greenfield put it, and Horowitz observes that its ugly aftermath demonstrated that the Democrats’ ultimate aim “was not to replace or destroy one man in office, or to win one election, but to establish a one-party state” and maintain a death grip on the reins of power. And that is where America stands now: “heading toward the abyss,” as one chapter is titled.

How do we pull back from the brink? In a word: fight. At 82, the former “Red Diaper baby” and leftist radical David Horowitz refuses to mellow; if anything, his writing and public speaking are more forceful, impassioned, and fiery than ever. Very few people on the right can match his political pugnacity, which is precisely what he insists we must be willing to wield in order to counter the left’s fanatical determination to win.

The Enemy Within is more than just a catalogue of outrages; it is a clarion call for conservative patriots to acknowledge that the left is not merely playing politics-as-usual but waging war. It is an exhortation for us to hurl ourselves into that fray – or risk losing America altogether.