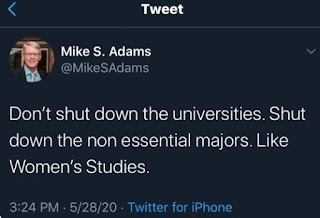 Mike Adams:            Interestingly, my political conversion process began first. I was indeed hired as a leftist professor back in 1993. But my political foundation actually began to weaken just a few months before I got my doctorate. I had a friend named Jonathan Steckler who – along with his girlfriend Tiffany – was kidnapped and murdered by an armed assailant. The incident shook me so much that I went out and bought a handgun – thus ending my long-standing support of a national ban on handguns. Later that year, I was encouraged by a long-time family friend to watch The Silent Scream by Bernard Nathanson. That began the process of my conversion from pro-choice advocate to pro-life speaker. I now travel the country speaking in defense of the unborn.

The process of religious conversion began in 1996. I was doing a teaching exchange in Ecuador when an opportunity arose for me to visit a prison in Quito. The conditions of the prison were appalling. There were 45 prisoners stuffed in 36 square meter cells. Confessions were literally shocked out of suspects who had their testicles wired to car batteries. Guards admitted that prisoners were sometimes told they were free to go and then shot in the back as they walked out of the prison. All of these horrors shook me out of my old worldview, which suggested that morality is relative – and that we should never judge other cultures. I came to understand that there is an absolute moral law written on our hearts. We know what is right and true from seeing that which is evil. The shadow proves the sunshine. And if we are to embrace the objective truth of the moral law then we must acknowledge that there is a lawgiver. All of this led me to theism. And, of course, it led me to recognize that cultures lacking basic respect for the moral law are deserving of judgment. Those who refuse to judge other cultures would even lack a moral basis for liberating the Nazi concentration camps.

My conversion to Christianity was propelled by a visit I had on death row in Texas at the end of 1999. John Paul Penry, a mentally retarded rapist and murderer, quoted John 3:16 to me after I had interviewed him. I was ashamed that he had read the Bible and I had not – given that his IQ was once measured at 53. So I bought a copy, read it, and converted about nine months later. This goes to show that God can use anyone. Even a death row inmate with limited intellectual capacity. We all need to remember that when we are discouraged and feel we are limited by our past mistakes.

Tapson:          In the wake of the 9/11 attacks, you were embroiled in a free speech controversy that you say basically launched your free speech activism. What happened?

Adams:           That was such a strange case because it involved a right to privacy issue. A student sent an inflammatory email essentially blaming the attacks of 9/11 on American foreign policy. This was just four days after the terror attacks when many of us still had friends missing in New York City. My response to the student criticized her remarks and even characterized them as unworthy of serious consideration. But I also acknowledged that her remarks were constitutionally protected speech. She then got mad and told her mother on me. Unfortunately, her mother was a college administrator. Ultimately, the administration got involved and they went into my email account – ostensibly to see whether I had “libeled” the student by sending my remarks to any other people, which I had not. The administration actually read private messages in the process. Then, the administration lied about having done so. That is when I got The Foundation for Individual Right in Education (FIRE) involved.

In the end, the case really backfired for the university. It is worth noting that the entire investigation was initiated based on the theory that a university email use policy was somehow violated by my First Amendment protected speech. Ever since then, I have been commenting on the university’s tendency to try to paper over the constitution with their own policies – as well as their tendency to lie about it to the press when caught. This happens a lot. Universities can seldom defend in public that which they do in private.

Tapson:          Your Christian conservatism ultimately led to you being discriminated against at UNCW, and to a seven-year battle with them, which you won in 2014. Can you tell us about that?

Adams:           Yes, that was another strange case. After I was denied promotion to full professor, I was told that the decision was based on my deficiency in every area – teaching, research, and service. That was shocking because I had been named professor of the year at the university before. I also had the highest teaching ratings in the department for years. I had more referred publications than the vast majority of those who had been promoted before me. I also had a strong record of service. To sum it all up, my evaluations from students were high both before and after my conversion. In contrast, the faculty members in my department had given me high ratings until I became known as a conservative and Christian. That’s when they started to downgrade me. Thus, we decided to sue.

The case became really important when the university tried to argue that columns I had written for TownHall.com, which often criticized university policy, were a) protected speech when I wrote them, but b) became unprotected “official duties” after I mention the fact that I was a columnist on my promotion application. The case went all the way up to the 4th Circuit and I won a unanimous decision. Ultimately, I was granted a jury trial and won in 2014. That victory secured my promotion with back pay. It also strengthened the rights of faculty to speak out on matters of public concern in their own speeches and opinion columns.

Tapson:          You seem to have a talent for triggering haters with your columns and social media posts. What do you recommend as the most effective strategy for asserting truth, in a culture in which leftists have weaponized their purported sensitivity to silence and marginalize ideological opponents like you?

Adams:           I have only one thing to say about this issue - and it is incredibly simple: the cancel culture, which is indeed weaponizing purported sensitivity in order to silence and marginalize (and destroy) ideological opponents, is the fault of conservatives, not progressives. Please allow me to explain.

There is a silent majority in this country – and they absolutely despise the tactics of these progressive “cancellers.” This majority also finds their progressive views to be deeply disturbing. Yet they refuse to speak up because they don’t realize they are the majority. If they do not speak up – as I have been speaking up for so many years – then we will no longer have a country to pass on to our children. The progressives will cancel the entire nation. So the most effective strategy for asserting truth is to simply assert the truth.

Tapson:          You recently decided to retire from the University of North Carolina – Wilmington amid some leftist outrage over tweets which the school labeled “vile and inexcusable.” What’s next for you, and do you think the death grip of Progressive ideology on “higher education” can be loosened, or is that a hopeless cause?

Adams:           I believe that it is fair to say that the death grip of Progressive ideology on “higher education” (I like that you put that in scare quotes) can no longer be loosened – at least in the context of our public universities. They are no longer serious places. Conservatives simply must start their own universities. It is not enough to have a couple of them. Conservatives need more choices than they are presently afforded.

I will definitely not be retiring. I will continue to travel the country and speak in defense of the unborn. I will also be writing more than I have been. Above all, I will be focused on what can be done to save this great country – and committing myself to witnessing to the lost souls who inhabit it. There is something very demonic going on in this country. Our present struggles have nothing to do with pandemics or with race. They are much deeper spiritual battles. I intend to be right in the middle of those battles fighting for truth until the Lord calls me home. There will be no time for real retirement. The times are just too important and there is much too much at stake to remain hidden on the sidelines.