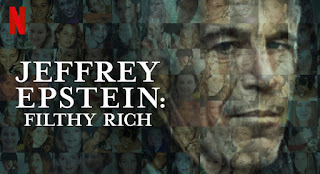 By comparison to the history-making events of 2020, the sordid saga of shadowy, uber-rich hedge fund manager Jeffrey Epstein, whose sex-trafficking trial temporarily dominated the news cycle last year, now seems foggily distant and even insignificant. His suspicious suicide while in custody spawned conspiracy theories and internet memes, and then – just as suspiciously – any highly-anticipated exposés of the rich and powerful who might have cavorted with underage girls on Epstein’s infamous “Orgy Island” disappeared into a black hole, and the news media went back to hating President Trump.
Now Netflix has premiered a four-part documentary series titled Jeffrey Epstein: Filthy Rich, which raised expectations again that the mystery man and his web of powerful acquaintances would be dragged into the cleansing light of day. Based on the 2016 book Filthy Rich: The Billionaire’s Sex Scandal – The Shocking True Story of Jeffrey Epstein by bestselling novelist James Patterson (journalists John Connolly and Tim Malloy are credited as authors as well), the series instead just drags viewers through the repellent Epstein’s mucky lifestyle but unfortunately offers no new revelations or insights into the man or any of his hedonistic friends in high places.
I was primarily curious to see how the documentary would handle former President Bill Clinton’s role in the controversy, partly because Epstein buddy Clinton is conspicuously absent from the series trailer (see below), and partly because author Patterson, who appears in the documentary himself, has at least a professional relationship with Clinton; they have collaborated on two thriller novels. Hillary’s infamously predatory husband is indeed presented in the documentary as being a friend of Epstein and as having flown on his private jet over two dozen times, but all this was all common knowledge before the Netflix series.
A former Epstein employee does claim in the film that he saw Clinton on his boss’ private island, and one of Epstein’s girls affirms that Bill was there but “I never saw him doing anything improper.” Clinton spokesperson Angel Urena has issued a blanket denial of any insinuation that Bill ever participated in Epstein’s pedophiliac shenanigans or even visited any of Epstein’s residences: “This was a lie the first time it was told, and it isn’t true today, no matter how many times it’s repeated.” Hillary unsurprisingly is neither seen nor heard from in the series. That’s as far as the series delves into the Epstein-Clinton connection.
Filthy Rich spends more time covering disgraced British Prince Andrew’s involvement, including showing footage of his epic fail of a BBC interview in which he claimed that he couldn’t possibly be the “profusely sweating” man described by one of Epstein’s girls because he was suffering from a medical condition at that time that didn’t allow him to sweat. He also claimed that he had no recollection of that same girl, whom he was photographed hugging on Epstein’s island. An employee at the island also asserts in the documentary that in 2004 he saw the Prince getting frisky in a pool there with the same girl, who was topless. This new salacious detail, however, is little more than an extra nail in the coffin of Andrew’s public life.
The show briefly features a few other figures either loosely associated with Epstein or accused of complicity in what a prosecutor in the show calls Epstein’s “molestation pyramid scheme.” Photos of him together with Donald Trump appear repeatedly throughout the series, although none of Epstein’s victims interviewed for the documentary ever suggested Trump was a party to anything. Also among them is world-famous attorney Alan Dershowitz, who represented Epstein during his prostitution solicitation case in 2008 and who obtained for his client a “sweetheart deal” of only 18 months, of which Epstein served only 13 in a minimum-security facility before serving probation under the loosest form of house arrest imaginable.

Dershowitz was accused by Virginia Roberts Giuffre of having had sex with her “multiple times” on Epstein’s private island. She is one of half a dozen Epstein victims interviewed for the series, women who were underage at the time and who ultimately went to law enforcement. But they were powerless to damage the influential Epstein, who had the connections and the money to shut down media exposés (such as a whitewashed Vanity Fair profile) and to avoid police investigations. Dershowitz vehemently denies Giuffre’s account on-camera, and indeed, convincingly proved his innocence in a lawsuit and then in a short book he wrote about it called Guilt by Association. In that book he speculated that Giuffre’s public accusation was part of a scheme to buy her silence from privately-accused wealthy alleged abusers by threatening to do to them what she had done to Dershowitz and to Al and Tipper Gore (both also not guilty): accuse them publicly.
In the process, Dershowitz appears to have demolished Giuffre’s credibility, which tends to cast a shadow over at least her portion of the Netflix series, in which she is the most prominently featured victim (she was also, at the time, the same young girl at the center of the allegations against Prince Andrew and who confirms she saw Bill Clinton on Epstein’s island.)
The final episode of the series focuses on how the #MeToo movement and Epstein’s arrest empowered some of his victims to come forward with their stories, only to be denied justice and closure when Epstein presumably committed suicide in his jail cell. The series addresses the suspicious circumstances of his death and presents details of an autopsy that concluded it was more consistent with murder than suicide, but again – nothing conclusive or new.
In the end, the Netflix series Jeffrey Epstein: Filthy Rich is an interesting-enough overview of his perverse tale, but it unsatisfyingly avoids the revelations viewers hunger for about the politicians, princes, and other notables in orbit around Epstein. Besides the hundreds, and possibly thousands of girls whose lives were inestimably damaged by Epstein and his alleged procurer girlfriend Ghislaine Maxwell (who remains at large), the real tragedy is that he was at the center of a sex-trafficking nexus for the rich and powerful, and the trail leading to their exposure came to a dead end in Epstein’s jail cell.