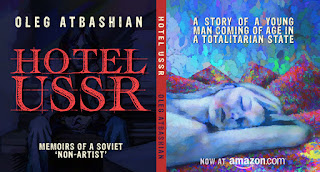 Like other children under communism, the young Atbashian was propagandized about the glorious promises of abundance and freedom to be found in a collectivist paradise. He dreamed of a future as an artist, but his ambitions quickly met with resistance because art supplies, and art itself, were reserved for state-approved artists and restricted to propaganda. “I thought I could beat the system and continued to paint,” he writes. “My youthful enthusiasm lasted for several years, until I realized that I’d been beating my head against an impenetrable wall made of regulations that governed our existence within the state.”

“To make us equal, the state regulated our existence in a way that left very few things to our personal discretion,” he says. “We owed our lives to the state and had to abide by its collectivist rules. But with so many rules, not a day went by without breaking at least one or two, because we were human beings, not unfeeling robots.” Subversive music from the free world like rock ‘n’ roll and even the musical Jesus Christ Superstar threatened the Communist system and give Atbashian a taste of liberation. But ultimately, “[w]ith everyone pursuing collective happiness while sacrificing their own, no one ended up happy.”

He gradually woke to the realization that the Communist dream was a fraud; his country was a dysfunctional dictatorship governed by bullies, liars, and thieves. “Out of seemingly good intentions, communists had built an impossible system… locked in a perpetual war against human nature, an uphill battle against the instinct to be free, to pursue happiness, and to care for one’s children. These instincts were vices corroding the collectivist state.”

Atbashian observes that, despite its promises, the Communist revolution brought social, economic, cultural, and technological advancement to a grinding halt. It had frozen time not just in his neighborhood, but in the country as a whole, while progress marched on outside its borders:

In the rest of the world, life galloped forward, creating new music, new fashions, new household gadgets, and new ways of thinking. Some of it was being smuggled into our world, and that’s how we knew about it. That world had no need for smuggling because everything it had was made by the people who lived in it. I wanted to be a part of that world.

He asked himself, “Why did we pretend we were still building communism when most people had stopped believing in it? Why did we live isolated from the rest of the world? Why did we continue to sacrifice our wellbeing to a myth?”

After Atbashian eventually manages to emigrate to the United States and build a life here, he reflects on “the stories of how newly arrived Soviet immigrants would burst out crying on their first visit to an American supermarket”:

Those weren’t the happy tears at the sight of abundance, but rather the tears of anguish at the discovery that everything they’d been taught about the world was a lie, that pain was not the norm of existence, and their sacrifice for the bright future turned out to be a cruel joke played on them by sadistic despots. All the shortages, waiting in lines, the bribes and kickbacks, the art of getting through the back door – none of it had been necessary. The rat race to obtain essentials, which had been their way of life for several generations – it wasn’t normal. Abundance was possible without the five-year plans, quotas, rationing, propaganda, one-party rule, and fear of the all-powerful state.

In one of the book’s most touching moments, Atbashian has a similar revelation upon entering a gigantic art supplies store in Manhattan. “Rows upon rows of shelves brimmed with products that catered to every artistic need. No gatekeeper was checking permissions, and no Artists Union card was required to make a purchase... After the first floor I went to the second, and then to the third. And then I imagined how different my life could have been and broke down in tears.”

Oleg Atbashian’s book leaves no doubt that building a "real socialism that works" is no more possible than building a house based on a mirage. “I hope this story can be an eye-opener for younger people who believe in the false promise of socialism,” he told me in conversation.

Spread the word about Hotel USSR – it is more likely to change resistant hearts and minds, or at least plant a crucial seed of doubt, than any number of pro-capitalist arguments.