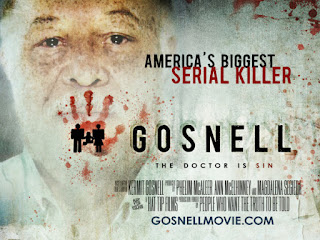 Masked by innocuous language like “pro-choice” and “reproductive care,” and protected by a media conspiracy of silence, the grim reality of abortion rarely surfaces in our cultural awareness. But a new movie, drawn from a real-life courtroom drama that exposed what is arguably the deepest, darkest episode in American abortion history, is poised to have a dramatic impact.
Directed by openly conservative Justified star Nick Searcy, who does double-duty playing the role of the defense attorney, and written by novelist and political pundit Andrew Klavan, Gosnell: The Trial of America’s Biggest Serial Killer is based on the riveting book Gosnell: The Untold Story of America’s Most Prolific Serial Killer, written by investigative journalists and filmmakers Ann McElhinney and Phelim McAleer. The husband-and-wife team are well-known for their controversial documentaries FrackNation and Not Evil Just Wrong, as well as for a play called Ferguson about the shooting of Michael Brown by a white police officer. To produce this controversial film that pro-abortion Hollywood studios wouldn’t touch, McAleer and McElhinney miraculously crowdfunded over $2 million from over 30,000 investors composed of “average” citizens – more money than any film project in the history of the Indiegogo crowdfunding site.
Former TV Superman Dean Cain stars in the film as the Philadelphia narcotics investigator without whose dedication Dr. Kermit Gosnell, played with chilling normality by character actor Earl Billings, might still be butchering babies today. Cain’s real life alter ego exposed not only the shockingly filthy state of the abortion doctor’s clinic, but also the grotesque evil being undertaken there. In addition to manipulating ultrasound readings to falsify fetal ages in order to perform late-term abortions well beyond the state’s legal limit, Gosnell’s practices included killing babies that were born alive by plunging scissors into the backs of their necks and snipping the spinal cords. In one powerful scene in the movie, the camera lingers on each face of the jury as the members peruse photographs of such examples of Gosnell’s victims. That scene alone is enough to drive home the undeniably evil nature of abortion.
A grand jury report chronicled how America’s biggest serial killer got away with murder for more than thirty years. It pointed the finger of blame not only at Gosnell and his wife who assisted him, but at his staff and officials in numerous state government agencies all the way up to the governor. Despite a long history of complaints and even suspicious deaths, official incompetence and neglect from the Pennsylvania Department of Health, Department of State, Department of Public Health, State Board of Medicine, and more official entities meant that Gosnell never suffered any consequences for decades of criminal malpractice – while the victims kept piling up. Medical professionals preferred to turn a blind eye to anything that might shine a negative light on abortion.

Gosnell ultimately faced 258 charges including seven counts of first-degree murder for babies whose spines he snipped; third-degree murder in the death of a patient who died post-abortion; conspiracy to commit murder in hundreds of instances of killing babies born alive; two counts of infanticide for failure to resuscitate born-alive infants that could have survived, and much more. But for the statute of limitations on infanticide, and Gosnell’s thorough destruction of evidence, he could have been charged with hundreds or perhaps even thousands of murder charges. Even so, as he was arrested and handcuffed, the smirking, confident Gosnell merely said, “So this is what happens when you try to help people.”
Despite all the disturbing evidence mustered against him, Gosnell’s trial was no slam dunk. First of all, the jury was very pro-abortion. Second, Gosnell’s masterful defense attorney ingeniously exploited the hazy line between what Gosnell did and what constitutes normal abortion procedure, which is barbaric enough even when legal. That moment is expertly recreated in the movie by Searcy and openly conservative actress Janine Turner, who plays a professional, law-abiding abortion provider.
Michelle Malkin rightfully calls this the most important movie in America right now. Why? The abortion-loving left does not want anyone to see this film, partly because it is not simply a pro-life screed that is easy for their side to dismiss. It is a true-life drama with an inescapable emotional impact, and it may change minds and hearts. The left has a death grip on pop culture and is deeply hostile to successful conservative incursions into that territory.
Just as the major news media sought to ignore the actual Gosnell trial (also depicted in the film) so as not to bring attention to the dark side of the abortion industry, the media now are trying to ignore the movie itself – and for the same reason. Although Gosnell was made available for review, only two major publications, the Los Angeles Times and Forbes, chose to review it. Despite this, word of mouth and ramped-up expectations among conservative audiences enabled the film to come in as the top independent film this weekend (twelfth overall), and eighth in per-screen average (on nearly 700 screens across the country) for all new films.
You not only should see Gosnell – you must. It’s the kind of movie conservatives always c0mplain Hollywood never offers us. Amid the usual sound and fury of the superhero sequels, frenetic animated flicks for kids, and horror gorefests – almost all of which are either tinged or saturated with social justice messages – that usually dominate cineplexes, Gosnell is serious entertainment for grownups. (And for those conservatives concerned that it might be stomach-churningly graphic due to the subject, rest assured that it is rated PG-13 and devoid of gore.) Unlike many low-budget independent films aimed squarely at conservative audiences, it’s high-quality storytelling and filmmaking. Significantly, it doesn’t mock us or our values.
It isn’t enough to turn our backs on pop culture and give the middle finger to Hollywood; if we want more producers and filmmakers out there to sit up and take notice of us as an underserved audience, we must reward those producers and filmmakers who buck the odds and create art worthy of our attention. Your support of this film at the box office, and later on DVD, will encourage more such quality films. Go see Gosnell: The Trial of America’s Biggest Serial Killer – it was made for you.
From FrontPage Mag, 10/14/18
at 1:28:00 PM