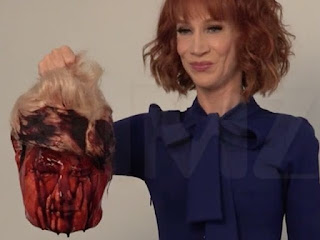 This week a Portland art gallery chose to display in its front window, facing the sidewalk at a busy intersection, a large black-and-white painting depicting the grisly decapitation of President Donald Trump. The painting is more than just another example of what a grotesque travesty modern artists have made of art. It is also a window into the left’s bloodlust and why progressivism is the totalitarian soulmate of Islamic fundamentalism.
The image at One Grand Art Gallery shows a hunting knife being drawn across the president’s neck as the executioner’s other hand grips Trump’s hair. Blood gushes from POTUS’ throat and streams from his nose while his eyes roll back in his head. Flames rise symbolically from an American flag pin on the president’s lapel, and the image is captioned in large capital letters, “FUCK TRUMP.”
This execrable excuse for art is so vile and violent that it could have been produced by ISIS. It actually was produced by an “artist” apparently named Compton Creep, whose personal website displays extremely disturbing, gruesome samples of his literally satanic work. A local news reporter spoke with him about the Trump painting; art is meant to provoke thought, he said . Of course, this image is the opposite of thought-provoking; it is purely visceral agitprop, which is designed not to spark thought but to replace it with propagandized emotion.
The image was part of a larger exhibit being hosted by the gallery wittily titled “Fuck You Mr. President,” featuring dozens of other so-called artists expressing their unhinged hatred of the President (a few samples here, but there is no information about this exhibit at the gallery’s website). The illustration drew massive social media anger and condemnation, naturally, which was intentional. On its now-deleted Facebook page (archived here), the gallery owner (whom the media are protecting by refusing to reveal his identity) played the victim by posting the beheading image with the caption, “The same people offended over a ‘death threat’ are the same people upholding death threats & violence. Irony.” The post was later deleted and the illustration removed from the front window, although as of this writing it remains on display inside the gallery.

This is far from the first time anti-Trump hysteria has compelled leftists to depict the beheading of the President. Most notorious (at least, until Creep’s “work” in the Portland gallery exhibit) was purported comedienne Kathy Griffin’s photo of her grimly displaying a mock severed head of the President soaked in fake blood. The uproar over that stunt shocked even the button-pushing Griffin, who complained that her career was suffering from the backlash and that Trump had “broken” her.
Earlier this year a mural painted by someone named Sasha Andrade at a charter school in Southern California portrayed Trump’s severed head impaled on the spear of an Aztec warrior. Then there was the incident at the University of Alaska in Anchorage last year when a professor, frustrated by Hillary Clinton’s election loss to Trump, drew fire for his bizarre painting of Trump’s severed head being held by the actor who plays Captain America in the Marvel movie franchise.
You may also recall that former President Barack Obama’s official portrait artist, Kehinde Wiley, had a penchant for creating works featuring black women beheading white women. Imagine the white-hot fury if President Trump selected as his official portrait artist someone whose oeuvre included whites severing the heads from blacks. Such a choice is unthinkable, and rightly so. But the left was, at most, indifferent to Obama’s unconscionable pick.
If any of these situations was reversed so that conservative artists were openly expressing a sick fascination with decapitating, say, Barack Obama, the left’s outrage would be apocalyptic, and the vast majority of conservatives would be repulsed as well. Remember, if you will, that a rodeo clown was drummed out of his job and banned for life from the Missouri State Fair in 2013 simply for wearing an Obama mask. A conservative who had painted the beheading of Obama would almost certainly have to enter the FBI’s Witness Protection Program (although considering the corruption and bias of the FBI these days, no conservative in that program would be safe).
Even before, but especially since, the 2016 presidential election, leftists have demonstrated over and over again that, like all totalitarians, they operate from a seethingly violent mob mentality. But progressives take a special delight in cutting off the heads of their political opponents and displaying them triumphantly to the crowd. It goes back as far as the French Revolution, which unleashed an absolutely rabid bloodlust that resulted in the beheading by guillotine of thousands of victims, including men, women, and children.
Whom does this remind you of? That’s right, Islamic fundamentalists, whose proud tradition of beheading helpless captives stretches back many centuries to the very beginning of Islam. As Jihad Watch Director Robert Spencer often points out, Qur’an 47:4 urges believers to strike at the necks of unbelievers. Even recent examples are innumerable. Just this week a twenty-year-old British-Bangladeshi named Naa’imur Zakariyah Rahman, arrested last November, was found guilty of plotting to behead Prime Minister Theresa May in a suicide attack on Downing Street.
In this respect, and in many others, progressives and jihadists are united in what David Horowitz calls an unholy alliance. Both are collectivist, totalitarian, terroristic, monstrously cruel, and unofficially partnered in a mission to destroy America and Western civilization. Of course, once that mission is accomplished, progressives will find themselves under the knife – but for now they are gleefully indulging in their evil fantasy of holding the blade to Donald Trump’s throat.
From FrontPage Mag, 7/19/18
at 12:46:00 AM