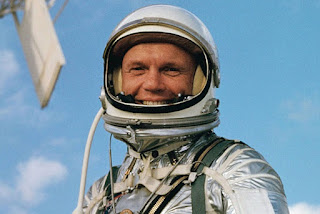 American hero John Glenn slipped the surly bonds of Earth for the final time last Thursday in his home state of Ohio at the age of 95.
“John Glenn is, and always will be, Ohio’s ultimate hometown hero, and his passing today is an occasion for all of us to grieve,” said Ohio Gov. John Kasich. “As we bow our heads and share our grief with his beloved wife, Annie, we must also turn to the skies, to salute his remarkable journeys and his long years of service to our state and nation.”
Long years and remarkable journeys indeed. Even before the native Ohioan joined NASA in 1959 and made history as the first American to orbit the earth in 1962, he was already a distinguished fighter pilot in both World War II, flying 59 missions, and the Korean War (90 missions), earning six Distinguished Flying Crosses and eighteen clusters to an Air Medal. After his historic space flight and work with NASA, he went on to serve as U.S. Senator from his home state for nearly 25 years, then once again made history by becoming the oldest human to go to space, at the age of 77.
For all his other achievements, Glenn was most celebrated, of course, as an astronaut. As one of NASA’s Mercury Seven group of military test pilots, Glenn was the very embodiment of “the right stuff,” as Tom Wolfe called his novel about the Mercury Seven (Wolfe depicted him as a “zealous moralizer,” but Glenn was portrayed more heroically than puritanically by Ed Harris in the film version).

“Love of country was a given. Defense of its ideals was an obligation,” Glenn wrote about joining NASA in his 2000 memoir. “The opportunity to join in its quests and explorations was a challenge not only to fulfill a sacred duty but to join a joyous adventure.”
It’s difficult to imagine today the degree of courage it took to be the first American to climb inside the tiny Friendship 7 capsule in which Glenn would circle the earth 3 times in five hours at speeds of up to 17,000 miles an hour. “They only had a couple of flights under their belts, and they’d had a couple of blow-ups,” recalled NBC correspondent Jay Barbree, who covered the flight. “It might explode just as well as take off.”
On February 20, 1962, fellow astronaut Scott Carpenter radioed “Godspeed, John Glenn” to him as he became the first American to orbit the Earth (the Soviet Union’s Yuri Gagarin beat the United States to it by less than a year). “It’s still probably the most dangerous manned flight we ever flew,” said Barbree. “Of course, John had the coolness and the guts and all to do it.” Glenn received the Congressional Space Medal of Honor, was inducted into the U.S. Astronaut Hall of Fame, and received the NASA Distinguished Service Medal.
He resigned from NASA in 1964 and retired from the Marine Corps in 1965, then won election to the Senate in 1974 and served there through January 3, 1999. In 2012 he was awarded the Presidential Medal of Freedom.
In 1998 the devout Presbyterian Glenn wrote that his religious faith was made stronger by his experience in space. While in orbit thousands of miles above the earth for the second time at the age of 77, Glenn declared, “To look up out at this kind of creation and not believe in God is to me impossible. It just strengthens my faith.” (As an interesting contrast, Nikita Kruschev of the atheistic communist Soviet regime proudly claimed that “[Yuri] Gagarin flew into space, but didn't see any god there.”)
As the Pittsburgh Post-Gazette put it in a tribute, “John Glenn was an American icon with the humility and simple goodness of an Ohio farm boy.” By all accounts he was the epitome of old-fashioned American values of integrity, humility, self- discipline, patriotism, honesty, courage, and responsibility, not only in his career but in his personal life. Glenn was married to his high school sweetheart Annie for 73 years; she was at his side when he passed away. A friend described the couple this way: “For anyone who's contemplating marriage, you ought to go to school on the Glenns, because they can teach us a lot about what unending love, with undying respect and admiration for each other means.”
As befitting his status as a true American hero, Glenn will be interred at Arlington National Cemetery. NASA Administrator Charles Bolden said of his friend, “John Glenn's legacy is one of risk and accomplishment, of history created and duty to country carried out under great pressure with the whole world watching.”
“Up, up the long, delirious burning blue,” fighter pilot John Gillespie Magee, Jr. wrote 75 years ago, in a poem that could have could have been voiced by Glenn:
I've topped the wind-swept heights with easy grace
Where never lark, or ever eagle flew —
And, while with silent, lifting mind I've trod
The high untrespassed sanctity of space,
Put out my hand, and touched the face of God.
Godspeed, John Herschel Glenn, Jr., the original American rocket man.
From Acculturated, 12/12/16
at 11:01:00 AM