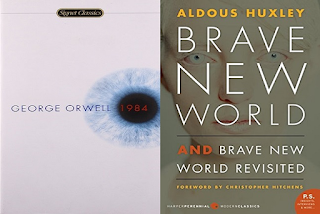 Even as far back as when I was in high school, in the Mesozoic Era, schools were fiddling with their reading lists, adding “relevant” contemporary titles to the old standards in order to pique student interest. These days schools are moving toward a Common Core emphasis on reading “informational texts” like nonfiction and memoirs. It would be tragic if some great works of fiction became casualties of that shift; in fact, I can think of two classic works that should never be stricken from school reading lists: George Orwell’s Nineteen Eighty-Four and Aldous Huxley’s Brave New World. Not only do the novels still hold up as literary storytelling, but their complementary cautionary messages are just as relevant – if not more so – than when both were published.
Orwell’s dystopian tale, published in 1949, centers on Winston Smith’s doomed rebellion against a Kafkaesque, all-knowing, all-seeing totalitarian state that stamps out all individualism and independent thought. In the world of Nineteen Eighty-Four – sometimes published as 1984 – the brainwashed masses live and work under omnipresent government surveillance, public mind control, and the glowering image of the mysterious Party leader, Big Brother.
Smith works for the ironically-named Ministry of Truth, which is responsible for propaganda and historical revisionism. His job is to rewrite past newspaper articles, or eliminate some entirely, so that the historical record always aligns with the current party line. He privately dreams of rebelling against Big Brother, but by the novel’s bleak end he comes to love his oppressor.
Orwell had an astute grasp of the ways in which totalitarians twist language in the service of their power-hungry agenda. His novel introduced into our lexicon some brilliant and chilling terminology such as “thought police,” “newspeak,” “doublethink,” “memory hole,” and most familiarly, “Orwellian,” the adjective for official deception, ubiquitous surveillance, historical revisionism, and the manipulation of language by a ruthlessly authoritarian state.
In fact, “Orwellian” was being used so often by the media in June of 2013 that Amazon.com sales of 1984 spiked nearly 10,000%. Why? Because at that time the news was brimming with revelations about secret, overreaching surveillance on the part of the National Security Agency. The ominous label was an indication of the extent to which Americans feel that the government has come to wield too much illicit, intrusive power. The surveillance state is even more deeply entrenched in Orwell’s England today.
In 1932, Orwell’s former teacher at Eton, Aldous Huxley, had released Brave New World, a very different dystopian viewpoint. Huxley’s ominous vision of the future was less overtly totalitarian than Orwell’s: the citizens of his World State live in perfect health and communal prosperity; they’re happily brainwashed by social conditioning and hallucinogenic drug;, free of emotional attachments and spiritual needs; kept distracted by intellectually unchallenging pastimes and recreational sex. Where Orwell’s characters were kept in line by fear and brutal coercion, Huxley’s willingly embraced their own subjugation through the apathy induced by petty diversions.
In his 1985 book Amusing Ourselves to Death, Neil Postman nailed the differences between the two:
What Orwell feared were those who would ban books. What Huxley feared was that there would be no reason to ban a book, for there would be no one who wanted to read one. Orwell feared those who would deprive us of information. Huxley feared those who would give us so much that we would be reduced to passivity and egotism. Orwell feared that the truth would be concealed from us. Huxley feared the truth would be drowned in a sea of irrelevance. Orwell feared we would become a captive culture. Huxley feared we would become a trivial culture.
These two books are spring-loaded with imaginative insights about language and power, humanity and nature, the individual and society, freedom and enslavement, love and hate. No “informational texts” could ever compare.
For high school readers who might think that Orwell’s vision could never come to pass in America, it’s important to note that Orwell set 1984 not in Stalinist Russia but in his native England to warn readers that no country, however civilized and democratic, however much it purports to celebrate freedom and individual rights, is free from the threat of totalitarianism. For those readers who dismiss Huxley’s vision as mere science fiction, it’s important to point out that to a large extent we already inhabit it.
From Acculturated, 9/8/15
at 6:23:00 PM