The Curse of the Participation Trophy 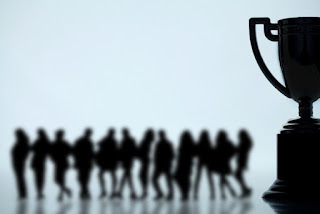 Last weekend Pittsburgh Steelers linebacker James Harrison posted an Instagram photo of a pair of “participation trophies” that were awarded to his two sons – and apparently to everyone else on the team as well – by their sports league. Harrison announced firmly that he is returning the trophies because they weren’t earned.
“While I am very proud of my boys for everything they do,” he wrote, “and will encourage them till the day I die, these trophies will be given back until they EARN a real trophy”:
I'm sorry I'm not sorry for believing that everything in life should be earned and I’m not about to raise two boys to be men by making them believe that they are entitled to something just because they tried their best...cause sometimes your best is not enough, and that should drive you to want to do better...not cry and whine until somebody gives you something to shut u up and keep you happy.#harrisonfamilyvalues
James Harrison has lived his own lesson about earning success. The youngest of 14 children, Harrison was a walk-on at the Kent State University football team, went undrafted by the NFL in 2002, and was cut four times by pro teams before going on to become a five-time Pro Bowl selection. “James is the type of person who will say: ‘I will prove you wrong. I deserve to be here,’” said Harrison’s best friend. Harrison, now 37, seems determined to instill that perseverance and fortitude in his boys, who are 8 and 6 years old.
The photo subsequently went viral and Harrison’s “family values” met with approval from every corner of the internet. The very fact that his principled position was so applauded indicates not only to what degree our culture has become infected with an entitlement mentality, but also to what degree many Americans have had enough of it. They recognize what should be obvious: that if everyone gets a trophy, then the trophy is meaningless; if simply showing up is praiseworthy, then the praise is worthless.
There is a scene in Lewis Carroll’s Alice in Wonderland in which the Dodo Bird is asked to declare the winner of a running competition, and without considering how far each participant had run or for how long, he announces that “Everybody has won and all must have prizes!” While reasonable people may find this nonsensical and patently unfair, it unfortunately describes an attitude toward children that has become prevalent among many educators, coaches, and child development experts.
Their theory that shoring up a child’s self-esteem is of primary educational importance has led to an obsession with protecting young people’s feelings at the expense of actual education, even in institutions of higher learning. Safe spaces, trigger warnings, and other politically correct shelters encourage insularity and infantilism rather than the broadening and maturation that should be the point of education.
In her book All Must Have Prizes, the brilliant columnist Melanie Phillips addressed the intellectual failure and moral relativism at the heart of such an educational doctrine. A Rousseau-influenced, “child-centered” approach meant that education was no longer seen as “the transmission of knowledge but as a therapeutic exercise in self-realization,” as Phillips put it. The result has been neither better-educated kids nor kids with better self-esteem.
Gill Robins, a British educator and author of Praise, Motivation and the Child, complains that handing out prizes for all is “very patronizing” and “simply doesn’t work” in terms of molding children’s behavior or laying the groundwork for their ability to understand the world. “How can the self-esteem of a person possibly be nurtured by telling them that they are as good at something as everyone else, even when they know that it’s not true?” And yet “our thinking is still weighted down by an outmoded belief that we can shape a person with daily bribes.”
No decent parents want their children to feel like losers. But attempting to prop up a child’s self-esteem with hollow participation trophies ensures not healthy confidence but narcissism. Jean M. Twenge, author of The Narcissism Epidemic: Living in the Age of Entitlement, writes that “[T]he ‘everybody gets a trophy’ mentality basically… builds this empty sense of ‘I’m just fantastic, not because I did anything but just because I’m here.’”
Of course, it’s important to encourage very young children to attempt new things, and to reward them with praise for the effort, regardless of how successful the attempt. You don’t want them to be afraid to try. You want them to know they have your unfailing support. But gradually they must be challenged and allowed to fail. At some point the training wheels must come off, and they must experience falling down and learn to get up and try again. They must develop – the hard way – a realistic sense of their own talents and of the sometimes boundary-pushing mental and physical effort required to actually accomplish something. Authentic self-esteem comes from striving and achieving, not from empty praise and condescending trophies.
Perhaps the widespread, approving response to James Harrison’s stand is an encouraging indication that parents are once again embracing common sense, and that failed educational theories are headed the way of the Dodo.