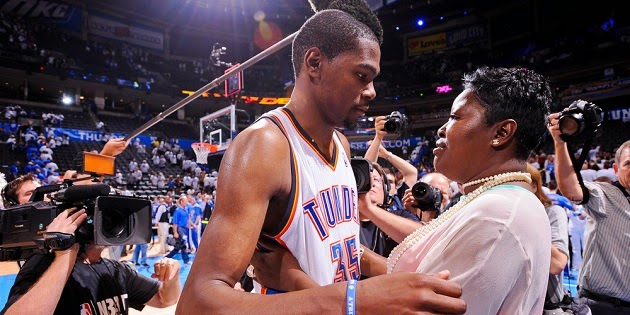 The wide world of professional sports is riddled with so many examples of unsportsmanlike braggadocio and trash-talking, that it’s refreshing when an athlete makes headlines by spouting not attitude, but gratitude.

Kevin Durant of the NBA’s Oklahoma City Thunder has certainly earned the right to be big-headed. At only 25 he has won an NBA Most Valuable Player Award, four NBA scoring titles, the NBA Rookie of the Year Award, and an Olympic gold medal. He has been selected to four All-NBA teams and five All-Star teams in his short career.

But humility keeps him grounded. A couple of years ago, Durant wrote about that and his Christian faith:

In the Bible, (it says) the Lord exalts humility and that’s one thing I try to be all the time. When I’m talking in front of people or when people tell me I’m great, I (remind myself that I) can always be better. Humility comes before honor. I always work on what I have now. I have to be thankful to the Lord for the gifts He’s given me. My gift back to Him is to always be humble and always work as hard as I can.

Durant has a tattoo on his wrist that says live for eternity. “God says that’s where we’re all headed. And I wanna start living with that eternal perspective on everything I do now.” That’s a pretty mature attitude for a rich-and-famous 25-year-old.

Philanthropist Durant is well-respected for giving back to his community. He donated one million dollars to the local Red Cross in the aftermath of a 2013 tornado that tore across Oklahoma. He personally visited survivors and prompted Nike, the NBA and the National Basketball Players Association each to match his contribution.

Durant, who has been called the nicest guy in the NBA, was awarded Most Valuable Player last week, and in an extraordinarily touching and emotional acceptance speech, expressed his heartfelt thanks to the friends and family members who made him what he is. Tearfully, he thanked his two brother also for his support, and told his older brother Tony that “you taught me to feel confident in myself, believe in myself, that I can do it when I didn’t think I could do it.” He thanked him for “texting me Bible verses every single day, telling me you love me every single day. That builds me up and I thank you so much. I love you.”

Finally, he addressed his mother Wanda Pratt, sitting in the front row. Sometimes called Durant’s secret weapon, Pratt and her husband divorced shortly after Durant was born. “We were very young, immature,” she recalled. “Really not understanding what being a family was. So we split up and I did the best I could… I decided early on that my desires and wants and even needs came second to what they needed and wanted. That was my mindset.”

She proceeded to live by that mindset, and Durant didn’t take it for granted. He continued his speech:

I don’t think you know what you did. You had my brother when you were 18 years old. Three years later I came out. The odds were stacked against us. Single parent with two boys by the time you were 21 years old.

Everybody told us we weren’t supposed to be here. We moved from apartment to apartment by ourselves. One of the best memories I have is when we moved into our first apartment. No bed, no furniture, and we just all sat in the living room and hugged each other because we thought we made it…

We weren’t supposed to be here. You made us believe. You kept us off the street, put clothes on our backs, food on the table. When you didn’t eat, you made sure we ate. You went to sleep hungry. You sacrificed for us. You’re the real MVP.

At that, the audience present rose to give Durant’s mom a much-deserved standing ovation, not because she had raised a superstar athlete, but because a mother single-handedly committed herself to raising a tight-knit family of good sons, keeping them out of trouble, and turning out a humble man who is unashamed to publicly discuss his faith and to express his love and gratitude to her and his brothers.

Earlier in that speech, Kevin Durant had told his younger brother that he strove to set a great example for him. It’s clear that, thanks to his mother, Durant in his short life is already serving as an exceptional role model not only for his brother, but for his teammates and fans – and that impact will go well beyond whatever successes he has on the court.