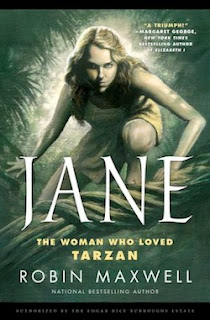 This year marks the 100th anniversary of the creation of one of the most recognizable and enduring figures in pop culture history–Tarzan of the Apes. And this month will mark the publication of Jane, the first version of the Tarzan story written by a woman, authorized by the estate of the prolific novelist Edgar Rice Burroughs, or ERB.
Robin Maxwell is the author of several historical novels featuring female protagonists, most notably The Secret Diary of Anne Boleyn. Her recruitment to pen a woman-centric spin on the Tarzan saga is clearly an attempt to court a new generation of female readers who have only a limited familiarity, if any, with the original work.
The popular conception today of Tarzan and Jane is unfortunately not so much formed by ERB’s novels as deformed by the old Johnny Weismuller movies of the ‘30s and ‘40s, which falsely portray the Ape-man as more ape than man, and Jane as a (tree)housewife in animal skins. In fact, Burroughs’s Tarzan was an educated English nobleman, Lord Greystoke, and Jane was a bold lady of their African manor.
The books were pulp adventure fare written long before today’s action heroines became as kick-ass as their male counterparts. But Burroughs’s fictional women weren’t mere helpless damsels in distress rescued by brawny he-men. His female characters like Jane and Martian princess Dejah Thoris, featured earlier this year in Disney’s movie John Carter, were not only feminine but, well, ballsy, and worthy adventuresses in their own right.
In any case, Maxwell promises that her take on the Tarzan tale will be “the story of a strong, fabulous woman who stands tall under extraordinary circumstances.” And so Jane becomes a trailblazing, turn-of-the-century paleoanthropologist in search of adventure on the “Dark Continent.” To make sure we get the point that Jane is no demure gentlelady, the book description tells us that “Jane Porter is far more comfortable in a lab coat dissecting corpses than she is in a corset and gown sipping afternoon tea.”

She’s also no sexless spinster immune to the call of the wild. The book description notes that she finds an “all-consuming love in one extraordinary man: Tarzan of the Apes,” and Maxwell even convinced the ERB people that Tarzan and Jane “must have tasteful sex in their relationship.” Tasteful but still premarital, which would have been quite the scandal in Jane’s day. Just don’t expect Fifty Shades of Greystoke.


In an online excerpt from the new book, Maxwell makes it clear that her protagonist’s tradition-breaking admission into Cambridge “had ruffled whole hatsful of feathers”:

But to hell with them! None of the other girls at Newnham had a fraction of the ambition that I did. I was going to make something of myself. Leave a mark on the world. And that was that.

Very headstrong and plucky. But the book seems to have a romance novel tone that may have trouble resonating with the audience it’s trying to attract. This new take on Jane’s admirable courage and perseverance may be undercut by its old-fashioned style. In a world in which The Hunger Games‘ Katniss or The Girl with the Dragon Tattoo‘s Lisbeth are edgier contemporary models for literary heroines, the new Jane Porter’s feather-ruffling pluckiness may be too tame to compete.
(This article originally appeared here on Acculturated, 9/7/12)
at 8:44:00 PM