The Path to 9/11Vindicated: CIA Chief Confirms Clinton Refused to Get Bin Laden 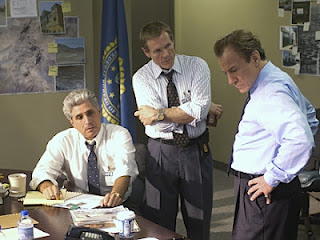 Few memes about Obama are as comical or aggravating as his “gutsy decision” to take out bin Laden. For one thing, military and intelligence insiders are strongly suggesting that he didn’t even make that call. And after all, what President wouldn’t green-light that no-brainer? Jimmy Carter, maybe. But now it has been confirmed that Bill Clinton passed on at least one clear opportunity to give a CIA team that go-ahead – letting the terrorist leader live to mastermind the 9/11 attacks. The incident very closely resembled a dramatized version in the controversial 2006 miniseries The Path to 9/11, a scene which Clinton and his people previously attacked as an outrageous fabrication.


This past Sunday night, CBS’ 60 Minutes broadcast a startling segment featuring former CIA officer Hank Crumpton, Deputy Director of the CIA’s Counterterrorism Center, chief of its Bin Laden unit in the late 90s, and one of the first to enter into Afghanistan after 9/11. Interviewer Lara Logan perceptively zeroed in on Crumpton’s participation in operations to capture and/or kill Osama bin Laden well before the 9/11 attacks, and what Crumpton calls “the lack of response on the part of the administration.”

Crumpton, whom Logan calls “one of the most seasoned and accomplished CIA officers of his generation,” described his team’s sighting of bin Laden:


Crumpton: Our human sources took us to a village uh, far, not far from Kandahar –


Logan: And what did you see there?


Crumpton: We saw a security detail, a convoy, and we saw bin Laden exit the vehicle.


Crumpton: Clearly. And we had – the optics were spot on, beaming back to us, CIA headquarters. We immediately alerted the White House, and the Clinton administration’s response was, “Well, it will take several hours for the TLAMs, the cruise missiles launched from submarines, to reach that objective. So you need to tell us where bin Laden will be five or six hours from now.” (Pause) The frustration was enormous.


Logan: So at that moment you wanted to kill him.


Logan: But you couldn’t get permission.

Logan then narrates that Crumpton “couldn’t get permission to do anything, including allowing the CIA’s Afghan agents on the ground to attack bin Laden’s compound.”

The Path to 9/11 was an ABC miniseries written and produced by Cyrus Nowrasteh [full disclosure: Nowrasteh is my friend and I worked on the project as well] which aired on two September nights in 2006. It dramatized the historical thread connecting the 1993 bombing of the World Trade Center, Islamic attacks on American interests throughout the ‘90s, and the terrorism of that fateful morning in 2001.


Prior to its premiere, an accusation of “conservative bias” on the part of the filmmakers quickly spun into leftist hysteria that the $30+ million miniseries was – laughably – a “well-honed propaganda operation” on the part of a stealth cabal of conservatives. (Check out John Ziegler’s riveting documentary Blocking the Path to 9/11 for the whole outrageous story.)
The miniseries featured a scene vetted, as all the scenes were, by a battery of ABC lawyers, in which a CIA team and its Afghan allies had bin Laden in its sights, called the White House for approval to make the hit, and were denied the go-ahead. This scene drove Clinton to near-apoplexy in an infamous interview with Chris Wallace. Another CIA bin Laden chief, Michael Scheuer, stated that the Clinton administration missed out on as many as ten opportunities to nail bin Laden.


Clinton and his supporters, fearing the miniseries would tarnish his political legacy, claimed it was full of such lies and pulled out all the stops to suppress the show. It nearly didn’t air at all – Disney was pressured to pull it or censor it by the Senate Democratic leadership, led by Harry Reid; three minutes ended up being cut from the broadcast. Despite a #1 rating on its first night and 28 million viewers, Disney CEO Robert Iger refuses to re-air this most accurate dramatization of the 9/11 saga, release a DVD, or even sell the rights to another company. He has explained without elaboration that it’s a “business decision.”
Business decision? Or is the show simply an embarrassment to Bill Clinton and a potential threat to the political future of Mrs. Clinton? Iger is a friend and supporter of the Clintons, and Nowrasteh himself was told privately by an ABC executive at the time of the controversy that “If Hillary weren’t running for President, this wouldn’t be a problem.”