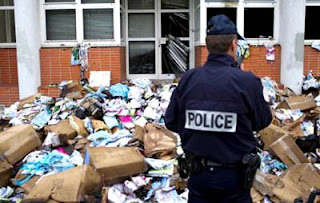 But Islamic law forbids depictions of its prophet, and as ’s glowering Ayatollah Khomeini once famously remarked, “There is no fun in Islam.” Muslim fundamentalists were apparently not amused by the magazine’s mocking tone, and a Molotov cocktail was thrown through the window of Charlie Hebdo’s offices in the wee hours of the morning, devastating the premises.
Its editor, Stephane Charbonnier, said,
We can’t put out the magazine under these conditions. The stocks are burned, smoke is everywhere, the paste-up board is unusable, everything is melted, there’s no more electricity.
But the issue will appear as scheduled and the magazine’s website appears to have been restored.
Charbonnier said the magazine had received “quite a few letters of protest, threats, insults” on Twitter and Facebook before the attack, but not as many as in 2007 when the publication, with a track record of offending all religions, was criticized by Muslims for reprinting the infamous “Danish cartoons” that caused violent outrage around the Muslim world.
The editor did not see the attack as the work of French Muslims, but of “idiot extremists,” though he did not clarify what kind. He said the attackers could not even have read the offending magazine:
The arsonists haven't read this paper, nobody knows what's in the paper except those who buy it this morning. People are reacting violently to a paper without knowing anything of its contents, that's what's most abhorrent and stupid.
Actually, what’s most abhorrent and stupid is that Islamic fundamentalists like the 57-member (56 Muslim nations and the Palestinian territories) Organization of the Islamic Cooperation have made the criminalization of any criticism of Islam their top priority, and too many dhimmis in the West, like the Obama administration, are facilitating their demands.
But so far French officials are coming to the magazine’s defense: “Freedom of expression is an inalienable right in our democracy and all attacks on the freedom of the press must be condemned with the greatest firmness,” Prime Minister François Fillon said in a statement.Presidential candidate Jean-Luc Melenchon called the attack “repulsive” and insisted that “Blasphemy doesn't exist as a crime. This is the French Republic. That's the law.” Nathalie Kosciusko-Morizet, Minister of Economy, noted correctly that “Those who did this designate themselves as enemies of democracy… You don't negotiate the freedom of the press with bombs,” she continued, and then added rather comically that “If you are not happy with what's in a newspaper, you take it to court.”
The French Council of the Muslim Faith () did just that in 2007, taking Charlie Hebdo to court over the Danish cartoons, but lost. As for the magazine’s most recent offense against Islam, head Mohammed Moussaoui asserted that his organization deplores “the very mocking tone of the paper toward Islam and its prophet but reaffirms with force its total opposition to all acts and all forms of violence.”
The firebombing comes in the wake of a similar assault just last month on a Tunisian television station for airing the “blasphemous” film , which sent hundreds of offended Tunisians on a rampage. The station received death threats and the owner’s home was attacked at night by around a hundred people hurling firebombs.
The Charlie Hebdo firebombing also echoes another Islamic attack on free speech from 2008. Random House, one of the largest publishing houses in the world, rescinded an offer to publish  The Jewel of Medina, an erotic novel about Mohammed and his child bride Aisha, after being warned by a scholarly consultant that many Muslims would almost certainly react violently. The consultant called it correctly: eventually, when a small British press daringly picked up the novel, the publisher's house was firebombed.
And of course there is the controversy in which the Comedy Central show’s creators Trey Parker and Matt Stone were targeted by a not-so-subtle threat from Zachary “Abu Talhah Al-Amrikee” Chesser, the leader of a small New York-based group of fanatics at RevolutionMuslim.com. Chesser found the fearless satirists guilty of an insulting depiction of Mohammed as someone who – wait for it – cannot be depicted without incurring death threats. “As Muslims,” Chesser said, “we do not define speech which has no place in a moral society as ‘free speech.’” Indeed, he said, free speech “is not a value that the Muslims share with as a whole.”
And lest we forget, as the media have: Molly Norris, the Seattle artist who responded to the South Park incident by proposing an “Everybody Draw Mohammed Day,” was pronounced the target of a death fatwa by recently obliterated Islamic cleric Anwar al-Awlaki. She is currently living in hiding.
But Charbonnier remains defiant:
There is no question of giving in… If we can poke fun at everything in France, if we can talk about anything in France apart from Islam or the consequences of Islamism, that is annoying.
It’s worse than annoying – it’s the beginning of the end of free speech.