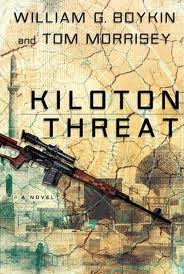 Lt. General (retired) William G. "Jerry" Boykin spent thirty-six years in the U.S. Army, many of them as an original member of Delta Force, the world’s premier Special Operations unit. His career plays out like a series of Tom Clancy thrillers: he helped capture Panamanian dictator Manuel Noriega, hunted the notorious drug lord Pablo Escobar, and has served in Vietnam, Iran, Somalia, Iraq, and Afghanistan, in addition to a stint with the , and became the Deputy Undersecretary of Defense for Intelligence under President George W. Bush.

Along the way, Boykin, now an ordained minister, courted controversy with comments that seemed to couch the War on Terror in religious terms. This drew fire from leftist figures such as Sidney Blumenthal, John Kerry, and Seymour Hersh, as well as from the Council on American Islamic Relations (), the self-proclaimed advocacy group linked to the Muslim Brotherhood.
The author of the autobiographical Never Surrender: A Soldier's Journey to the Crossroads of Faith and Freedom and the thriller Danger Close has a new novel, Kiloton Threat. Both thrillers feature Special Forces officer Blake Kershaw combating Muslim extremism.