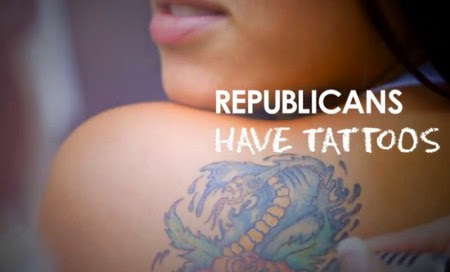 In the wake of a second presidential election loss in 2012, Republicans went back to the drawing board looking for a more effective way to present themselves and their message. Now a brand new ad campaign has been launched which demonstrates that Republicans are even more clueless about selling themselves today than they were two years ago and four years before that. The pathetic message this disastrous ad seems to be sending on behalf of Republicans is this: “Hey Democrats, please like us – we’re just like you!”

The 97-second ad, part of a campaign from GOP strategist Vinny Manchillo, a former member of Mitt Romney’s team, seeks to dispel hateful stereotypes of the right by humanizing Republicans and presenting them as victims of liberal bullying. Here is the message at the campaign’s website, republicansarepeopletoo.com:

Of course we do and of course we are. But the ad and the campaign reek of self-pity, weakness, defensiveness, and desperation to be liked by progressives who view us with hatred and contempt. In light of this ad, it’s no wonder they have contempt for us. The left has had the right on the ropes for so long that the only strategy we know is defense, and yet we’re too punch-drunk to do even that effectively. We’ve been reduced to begging leftist haters for crumbs of kindness and respect and mercy.

This is the same concept behind our government’s failed efforts to win the hearts and minds of Muslim fundamentalists. Trying to convince people who have sworn to annihilate us that Hey, we’re really nice and maybe we could be friends! accomplishes nothing except to inspire the jihadists’ contempt and embolden them to close in for the kill. This “Republicans are people too” campaign will have precisely the same impotent effect on the hearts and minds of progressives.

Trying to convince the brainwashed left that we’re not heartless, unsophisticated, old white bigots is a very misguided strategy. First of all, we’re not simply misunderstood – we’ve been relentlessly demonized. The left has very effectively caricatured us as monsters, not people, in order to marginalize and then annihilate us. Second, pushing back against this demonization just plays into their hands. It allows them to frame the debate, set the rules, and control our response. And it is a doomed strategy because nothing conservatives can do will cause progressives to feel all warm and fuzzy about us. We are the enemy and they will make no concessions to us because they don’t need to or care to.

This is war. We must regain our self-respect, get off the ropes and go on offense. To paraphrase General Patton, who knew a thing or two about kicking the enemy’s ass, no bastard ever won a war by pleading with the enemy to be treated nicer. You win it by making the other poor dumb bastard plead with you to be treated nicer.

Instead of presenting ourselves as lukewarm Democrats so that we will be liked, let’s brazenly embrace who we are and what we believe. In addition to going for the left’s jugular with ads that expose their collectivist, racist, big government, anti-liberty philosophy, how about a 97-second ad that sells conservative qualities and ideals, and makes them so appealing and compelling that liberals and independents wish they were us? The message should be, “Proud to be conservative!” not “I can’t be all bad – I read the New York Times!” The message should be “We can make America strong and free again,” not “I drive a Prius because I’m an emasculated conformist too!”

It’s long past time for the right to snap out of our punch-drunk daze and take the fight to the progressives. We either stand unapologetically for our values and our beliefs, or surrender.