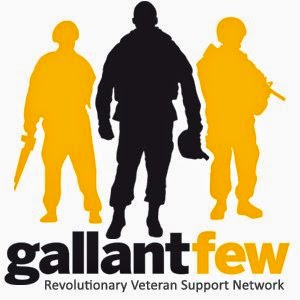 “Our culture has descended into one of ignoring the best and celebrating the least,” reads the website for GallantFew, a support network for military veterans. That means that too many of America’s best, home from war, are suffering in silence, with the result that we are losing nearly two dozen a day to suicide. GallantFew is working to change that.

Michael Broderick is a Marine Corps vet and an actor in Los Angeles [and – full disclosure – a friend of mine], with appearances on shows such as Criminal Minds, The Mentalist, The Unit, 24, and Justified, among others. He also does voiceover work on national commercials and in video games like Medal of Honor: Warfighter. He and his wife Dana Commandatore are the founders of RethinkingAutism.com, devoted to improving the quality of life of autistic people. Michael is also involved with GallantFew, and I asked him a few questions about that.

Mark Tapson:    Michael, what is Gallant Few and what’s the Poster Project all about?

Michael Broderick:           GallantFew is a veteran mentoring organization founded by retired Army Ranger Karl Monger. Their mission is to help reduce veteran unemployment and homelessness and to eliminate veteran suicide. The way they do this is to provide one-on-one peer mentoring to veterans. In other words, GallantFew will match a transitioning veteran (someone recently separated from active duty) with a veteran from their community who has already made the transition to civilian life successfully. The Poster Project is a way to raise awareness and funds for the organization.

The first time I did the Project, I purchased a collectible poster for Band of Brothers [the HBO series about the U.S. Army’s Easy Company] that had the signatures of six WWII veterans of Easy Company. I spent the next 15 months getting the signatures of 30 members of the cast and crew including Steven Spielberg, Tom Hanks, Damien Lewis and many others. I was also able to get the signatures of two more Easy Company veterans. The Poster went to auction in 2013 and raised over $4,600.00 for GallantFew. This year, I am doing it again with a movie poster for Black Hawk Down [based on the true story of U.S. Army Rangers’ fierce 1993 firefight in Mogadishu].

MB:    It’s going well! I’ve got three signatures so far. The first was Matthew Marsden who played “Sizemore” in the film, second was Tom Sizemore who played “McKnight” and the most current signature I got was, for me, the most exciting. First Sergeant Matt Eversmann was in Los Angeles recently and he signed the poster. As you remember, 1SG Eversmann was portrayed by Josh Hartnett and his story was at the center of Black Hawk Down. Matt also recorded a special message for the actors and members of Task Force Ranger and Delta, encouraging them to get involved in The Poster Project.

MT:    Can you talk about your own military background and how and why you became involved with Gallant Few and the Poster Project?

MB:    I served in the Marine Corps with HML/A-167 in a support role completing a four year enlistment and was honorably discharged in 1990. After 9/11 happened and the wars in Afghanistan and Iraq got longer, I felt a real desire to do something to support my fellow veterans. I met and befriended Army Ranger Michael Schlitz and, like he does on so many, he had a powerful impact on me. I learned about the work that Mike and Karl Monger were doing with GallantFew and I wanted to support their mission. That brought about the idea for The Poster Project.

MT:    What kinds of issues do returning veterans face when they leave combat duty and come back home, issues that civilians can’t really grasp?

MB:    The big three issues are the ones I mentioned before: unemployment, homelessness and suicide. GallantFew attacks these by getting at the root causes. Oftentimes a big factor in these situations is a feeling of “otherness” – veterans in general, and combat veterans in particular, often have difficulty relating to their civilian peers and vice versa. This can cause feelings of separation, which lead to isolation. In speaking to my combat veteran friends, it is this feeling of isolation that can have the most detrimental effects.

Civilians, on the other hand, often buy into the “damaged PTSD veteran” narrative and are uncomfortable engaging with a man or woman who has served in combat. This can unintentionally exacerbate the problem.

Currently, we are losing 22 veterans a day to suicide. That’s simply unacceptable.

MT:    What about the recent VA scandal, the revelations of neglect and backlog?

MB:    As more and more things come out about the way the Veterans Administration has handled things, it’s clear to me that there must be major housecleaning there from the bottom to the top. This has been a long time coming. We’ve been at war for a decade and the fact that the VA is so ill-prepared leaves me dumbfounded. Even worse is the apparent dishonesty about what’s been going on there. In my opinion, it’s not simply a funding issue but an absolute systemic failure. A lack of accountability will always lead to disaster.

This is another reason that veterans are stepping up to help other veterans. At this point, there’s no more effective tactic than attacking these issues on a peer-to-peer level.

MT:    What can civilians do to better show our appreciation and understanding for any vets we might know, or even don’t know but might encounter in the course of our day? How can we help Gallant Few?

MB:    Anyone can help GallantFew at any time. Whether you're a veteran who would like to volunteer as a mentor or you would just like to support the mission with a donation, you can do that at GallantFew.org and their partners RaiderProject.org.

Your readers can support The Poster Project by visiting us on Facebook or on Twitter and helping me spread the word. Likes, shares and retweets are always appreciated.

Finally, if you know a veteran, you can simply reach out and check in with them. It really is that simple. Whether it's someone you know well, an online acquaintance or someone you don't know well at all, you can ask how they're doing. Every so often, just ask how they're doing. That's how anyone in your life knows you care, military or civilian. The key, though, is being ready to listen if and when they are ready to talk. Don't worry about having answers or solutions. Just listen. Because that's what friends do. Hell, when you're done reading this, why not check in with a veteran you know?