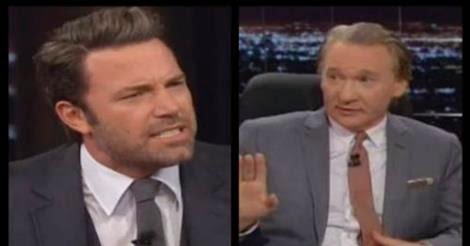 I don’t usually stand with comedian Bill Maher, but last week on his Real Time program the provocateur once again was a voice of reason addressing the Islam Problem. His guests were atheist author Sam Harris, former RNC Chairman Michael Steele, New York Times columnist Nicholas Kristof, and actor/director Ben Affleck of the Oscar-winning Iranian hostage crisis flick Argo. As you might expect from such a lineup, the discussion swiftly degenerated into the usual stalemate between facts and politically correct defensiveness.

“Liberals need to stand up for liberal principles,” opened Maher, “freedom of speech, freedom to practice any religion you want without fear of violence, freedom to leave a religion, equality for women, equality for minorities, including homosexuals.” When this earned applause, he continued, “these are liberal principles that liberals applaud for, but then when you say in the Muslim world, this is what’s lacking, then they get upset.”

Sam Harris, an atheist who, like Maher, at least understands that not all religions are the same, replied,

Liberals have really failed on the topic of theocracy. They’ll criticize white theocracy, they’ll criticize Christians, they’ll still get upset over the abortion clinic bombings that happened in 1984… The crucial point of confusion is that we have been sold this meme of Islamophobia where every criticism of Islam is conflated with bigotry toward Muslims as people, and that is intellectually ridiculous.

This brought whoops of approval from the audience, and a highly agitated Affleck took the opportunity to jump in and challenge Harris on his credentials for discussing Islam. Of course, Affleck, who had nothing knowledgeable to say about the religion himself, immediately proved Harris’ point by calling his statement “gross” and “racist” – buying into the standard progressive misconception that Islam is somehow a race. Maintaining his composure, Harris responded, again to applause, that we have to be able to criticize ideas. This was a point with which Affleck hastened to agree – until Harris dropped some truth that “Islam is the mother lode of bad ideas.”

“Jesus,” a frustrated Affleck exclaimed. He practically came out of his chair a moment later exclaiming, “How about the more than a billion people who aren’t fanatical, who don’t punish women, who just want to go to school, have some sandwiches, and don’t do any of the things you say all Muslims do?” This too brought applause, even though once again he was proving Harris’ point that criticizing Islam gets unfairly conflated with a broad-brush attack on all Muslims.

“All these billion people don’t hold these pernicious beliefs?” Maher asked. “That’s just not true, Ben.” When Harris “unpacked” the concept for an impatient Affleck, explaining about concentric circles of fundamentalism, Affleck shut down listening and simply interjected, “Let him [Kristof] talk.” Nicholas Kristof defended moderate Muslims who speak out, and Michael Steele raised the point that opposition Muslim voices don’t get media coverage, to which Maher, trying to bring the discussion back to the ideology of Islam, responded that a big reason Muslims don’t speak out is fear. “It’s the only religion that acts like the mafia,” Maher said. “They will f**king kill you if you say the wrong thing, draw the wrong picture, or write the wrong book. That’s why Ayaan Hirsi Ali needs bodyguards 24/7.”

Affleck, unable to restrain his righteous anger, suddenly gesticulated at Harris as he began to rant irrationally. “What is your solution, to just condemn Islam? We’ve killed more Muslims than they have us, by an awful lot, and yet somehow we’re exempted from things because they’re not reeeally a reflection of what we believe in…”

When he couldn’t be reined in from this tangent, Harris condescended, “Let me just give you what you want,” and proceeded to say that there are hundreds of millions of Muslims who don’t agree with ISIS and that reformers of Islam should be supported. That didn’t pacify Affleck or Kristof, who said that Harris’ point still smacked of “the way white racists talked about African-Americans and defined blacks” – proving yet again Harris’ point that criticizing Islamic ideology always raises the specter of Islamophobia.

When Affleck began another stupid rant, equating a factual discussion of Islam with racism against blacks, Maher cut him off. “It’s based on facts. I can show you a Pew poll of Egyptians – they are not outliers in the Muslim world – that say like 90% of them believe death is the appropriate response to leaving the religion. If 90% of Brazilians thought that death was the appropriate response to leaving Catholicism, you would think it was a bigger deal.”

“I would think it was a big deal no matter what,” Affleck lied, trying to sound fair and balanced. People like Affleck will defend the rights of jihadists all the way up until the blade severs their heads from their bodies, but think nothing of publicly smearing all Christians as theocratic bigots.

“I’m simply telling you,” Affleck told Harris, “I disagree with you.” Harris calmly countered correctly with, “You don’t understand my argument.”

That’s because Ben Affleck is typical of uninformed but holier-than-thou, media-empowered Hollywood actors, who substitute passion for thought and utopian ideals for reality, who reject facts for ad hominem slurs of racism, and who wear the blinders of moral equivalence because their false god is multiculturalism. Unfortunately, we can’t dismiss the influence of such smug, ignorant loudmouths on the smug, militantly ignorant sheep who constitute their audience.

“We’re obviously not convincing anybody,” Bill Maher conceded. Maybe, maybe not, but unlike nearly all of his cohorts in the media, at least Maher’s willing to try.