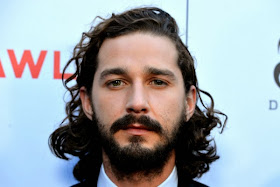 I’ve avoided writing about Danish director Lars von Trier’s upcoming arthouse movie epic Nymphomaniac for two reasons: one, such blatant titillation is boring, and two, I didn’t want to give publicity to a film I feel certain will be a degrading experience. But the recent revelation that actor Shia LaBeouf secured his role in the movie partly because he sent pictures of his penis to the filmmakers has compelled me to comment.

If you’re not familiar with von Trier, he’s the provocateur behind such disturbing flicks as Dancer in the Dark, Antichrist, Dogville, and now the sexually explicit Nymphomaniac – which, as the title suggests, isn’t exactly a Disney movie, and which is notable mostly for its unusually creepy marketing campaign consisting of posters of the actors in mid-orgasm. If you have ever found yourself wondering what The Girl with the Dragon Tattoo bad guy Stellan Skarsgaard looks like during sexual climax, well, now you know. As Midwestern storyteller Garrison Keillor once put it, “If it feels good, it probably doesn’t look good.”

I’m not sure why anyone would rush to cinemas to see Shia LaBeouf in full frontal nudity and having onscreen sex, but apparently von Trier thinks he will be a draw for the audience. Mack Rawden at Cinemablend exposed, if you’ll pardon the pun, some eyebrow-raising news about the casting process for LaBeouf, which entailed him emailing producers a picture of his penis. As LaBeouf himself explains in this video interview:

I'll never forget this because my entire team reacted with such a fear, you know? The first request on the production end, not from Lars, but from production, was pictures of my penis…

Lars goes, “All right... Send him the (offer) letter.” The letter was, “Are you game?” And so I guess the first test was, “Let's time how long it takes this mother****er to send his dick over the Internet.” It was like 20 minutes. So they were like, “All right, (the) kid’s ready.”

Ready for the challenge? Or just willing to debase himself? The best actors and actresses have a courageous capacity for exposing themselves emotionally; but as much as ones like LaBeouf believe that it shows serious commitment to their craft, exposing themselves physically is irrelevant and unnecessary. And sharing genitalia selfies with the producers at their demand merely reveals a willingness to humiliate yourself for the gig.

Rawden, on the other hand, finds it admirable: “[I]n an age where everyone is so f***ing politically correct and unwilling to go out on a limb, [LaBeouf’s] character trait is actually kind of refreshing.” I wouldn’t call it refreshing so much as depressing, not only for what it says about LaBeouf (and it’s not my intention to single him out; for all I know, his fellow Nymphomaniac actors also submitted to this demeaning casting process), but about the filmmakers and people like Rawden, all of whom seem to believe that LaBeouf’s compliance with this request constitutes artistic courage.

The entertainment world has been pushing the envelope of taste so far for so long that it’s time for it to come full circle. Nudity and onscreen sex are almost always gratuitous*, boring and predictable – and most unforgivably, they take the audience out of the story. You know what would be artistically “edgy” and courageous now? Restraint. Subtlety. Imagination. Drawing a line. Personal dignity. It doesn’t take courage to play into Hollywood’s morally vacant compulsion to push sexual boundaries; it takes courage to refuse to.