The Most Dangerous President in American History 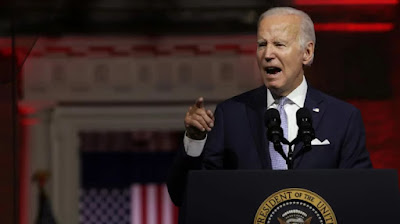 Prior to Joe Biden’s ascension to the White House in early 2021, it would have been difficult for many American patriots to believe that a worse president than Jimmy Carter or Barack Obama could sit in the Oval Office. Then Biden wasted no time proving those patriots wrong. From Day One he has been such an unmitigated disaster for the country that only 19% of Americans said in a poll last Sunday that they want Biden to run again in 2024. A July poll revealed that only 13% of Americans believe the country is on the right track. Apparently few believe that Biden is building back better, much less making America great again.

His incompetence (or conversely, his competence in carrying out a destructive agenda) has done more than just bring the country to the brink of a failed state after only half a term, though; it also has endangered Americans in many ways, and its legacy will continue to do so for generations. Indeed, bestselling author Nick Adams, in his new book from Post Hill Press, labels Joe Biden The Most Dangerous President in History.

Adams, 38, Australian-born but a naturalized American citizen and proud of it, is the author of several bestselling books such as Retaking America, Green Card Warrior, and Trump and Churchill: Defenders of Civilization. He is a tireless public speaker and social media influencer, as well as a frequent commentator in the news media such as at Fox News. In addition to having been appointed by President Trump as a scholar to the Smithsonian, Adams also runs a nationwide nonprofit called FLAG, the Foundation for Liberty and Greatness, whose mission is to educate Americans about the values and principles that make our country exceptional.

His new book, The Most Dangerous President in History, lays out some of the principal ways in which our Divider-in-Chief Biden is running the ship of state aground. In chapters on shutting down the economy instead of the coronavirus; on flooding our southern border with migrants and flooding cities across the U.S. with Afghan refugees; on demonizing concerned parents at school board meetings as domestic terror threats; on undermining our military; and on demonstrating weak leadership regarding China and Ukraine, Adams makes the case that Biden is creating crises that threaten our national security and put American lives at risk.

On Biden’s border policy, for example: the Left likes to paint anyone concerned about the open floodgates of our southern border as racist and anti-immigration. In fact, conservatives simply think it’s sensible to have a system in place for the vetting of people who want to come here, and to have reasonable restrictions or guidelines about the flow of people we let in. There isn’t another country in the world that doesn’t do that. But Biden’s party isn’t satisfied with anything less than an unlimited number of potential Democrat voters streaming across the border – and drug cartels, human traffickers, and terrorists along with them.

As Adams points out in his book, instead of policing our borders, the Department of Homeland Security is instead obsessed with a domestic terror threat that the Biden administration is greatly concerned about: parents expressing their outrage at school boards over the Critical Race Theory indoctrination and gender ideology sexualization of their children. The branding of these rightly-concerned citizens as violent terrorist threats is one of the most disgusting smears the Left has ever used against its political opponents.

But potentially the most serious threat Biden and his administration present is in its subversion of our military – through diversity/equity/inclusion wokeness, the mandating of COVID vaccines to weed out potential dissidents, and the leadership’s focus on climate change and “whiteness” as our greatest existential enemies. Adams addresses this in a chapter that details, among other things, the debacle of our withdrawal from Afghanistan, and Gen. Mark Milley’s treasonous warning to China during the Trump years.

The book concludes with a chapter about Biden being compromised on China and Ukraine, a national security threat that our complicit media don’t want to talk about, much less investigate. And then of course, there’s Joe’s embarrassment of a son, Hunter. The Biden family has no compunctions about selling America out to our enemies or dragging us into a nuclear war with Russia.

Adams notes that Biden is dangerous not only not only on his own, but also because of the people with whom he has surrounded himself in his administration, such as the Secretary of Transportation diversity hire Pete Buttigieg, the epically incompetent Vice President Kamala Harris, and Supreme Court Justice Ketanji Brown Jackson, who infamously declared before Congress that she couldn’t define the word “woman” because she isn’t a biologist. There doesn’t seem to be a single appointee in the administration that is there because of actual merit and qualifications.

The Most Dangerous President in History, like Nick Adams himself, is a bracing shot of patriotic common sense. If the book has a failing, it is that it does not include all of the ways in which the grouchy old radical Biden and his administration are putting this country at serious risk (admittedly, doing so would have made the book too unwieldy to lift for anyone but bodybuilders).

But to add one more reason to the mix – one Adams couldn’t have included because it arose just after the publication of his book – consider the recent, treasonous prisoner exchange of the billionaire Russian arms dealer Viktor “Merchant of Death” Bout for women’s basketball star Brittney Griner, who was serving a nine-year sentence in Moscow for drug possession. Besides the fact that the Biden administration left retired U.S. Marine Paul Whelan, unjustly-imprisoned in Russian custody since 2018, this shocking capitulation to Russian demands demonstrated to both our allies and our enemies that America under Biden is pathetically weak, and it exposes Americans to an increased threat of being kidnapped by foreign powers again.

Only the most ideologically deluded Democrat sincerely believes that Joe Biden is anything but a catastrophic failure, both domestically and abroad, as the Leader of the Free World. Nick Adams’ new book demonstrates this abundantly well, but also points the way optimistically forward to the presidential election of 2024 – if we are as committed to taking our country back as the Left is to fundamentally transforming it.